Vasyl: If you’re a professor of parasitology, then no doubt you’ve lost great students to medical, veterinary, or dental schools. Let me tell you a story about the one that didn’t get away.

Stephen Greiman started working in my lab in 2008. He was sure he wanted to be a veterinarian, and parasitology research was fitting nicely into his career path. After doing a terrific job in my lab during the school year and over the summer as an REU, Stephen asked me for a letter of recommendation for vet school. While I wished Stephen would stick with parasitology, obviously said I would gladly write his letter.

Stephen: The University of North Dakota (UND) is the Nation’s top aviation school, and I started my collegiate career at the UND with the goal of becoming an airline pilot. I received my private pilot’s license that summer, but aviation wasn’t what I thought it would be. I contemplated leaving UND, however I had already made friends and the thought of taking time off to switch schools didn’t seem practical. So I stuck it out at UND and switched to a biology degree with a pre-veterinarian focus. Like most young undergraduates, I didn’t know much about career options with a biology degree (beyond medical fields), and actually knew nothing about scientific research. I knew I liked working with animals, especially a diversity of animals. So being a Vet seemed to match up. Man, was I fortunate to stay at UND, as while taking Vasyl’s Animal Biology course, he offered up a position to do research in his lab, so I figured, “why not?”, let’s see what parasitological research is, and since then, I have never looked back.

Vasyl: As a reward for great work as an REU student over the summer, I invited Stephen to join me for a short collecting trip on the Gulf coast. Although he didn't have the sufficient background in parasitology at the time to realize it, I was bringing Stephen to parasitologists’ hallowed ground. Our base camp was the famous 137A room in Dr. Overstreet's laboratory at the Gulf Coast Research Laboratory! That lab saw a lot of great parasitologists working and great parasitology done within its walls over the decades.

The fun started as soon as we got off the plane. We immediately set traps in a couple of water bodies along the Pascagoula River. When we went to check the traps early in the morning the next day, Stephen caught his first cottonmouth, and the traps had turtles and (surprise!) a decent size alligator. For the next few days we collected by hand, by trapping, cast netting, gill netting, and by firearm in oxbows, bayous, the Grand Bay estuary and a salt marsh.

Stephen: This trip to Mississippi was a real eye opener for what a parasitologist could do! Prior to this trip I worked mostly in Vasyl’s lab staining and mounting worms, extracting, amplifying and sequencing parasite DNA, with a little host necropsy mixed in. When we arrived on the Gulf Coast we quickly jumped into collecting. What an amazing experience, I had already collected using a firearm, but had never used gill nets or turtle traps, and certainly never got to hold a prehistoric looking gar or alligator snapping turtle.

Vasyl: Stephen had an opportunity to examine a variety of animals for parasites, from amazing gar fishes, snakes and turtles to an alligator and birds. We took these animals back to Dr. Overstreet’s lab, where Stephen saw lots of tapeworms and digeneans (including schistosomatids and spirorchiids). I had never had a chance to do anything like that as an undergraduate (or a graduate) student so I hoped Stephen enjoyed it. There was a lot of fun in the form of waking up very early, getting into mud or in the fresh/brackish/salt water, working all day, and going to sleep very late. 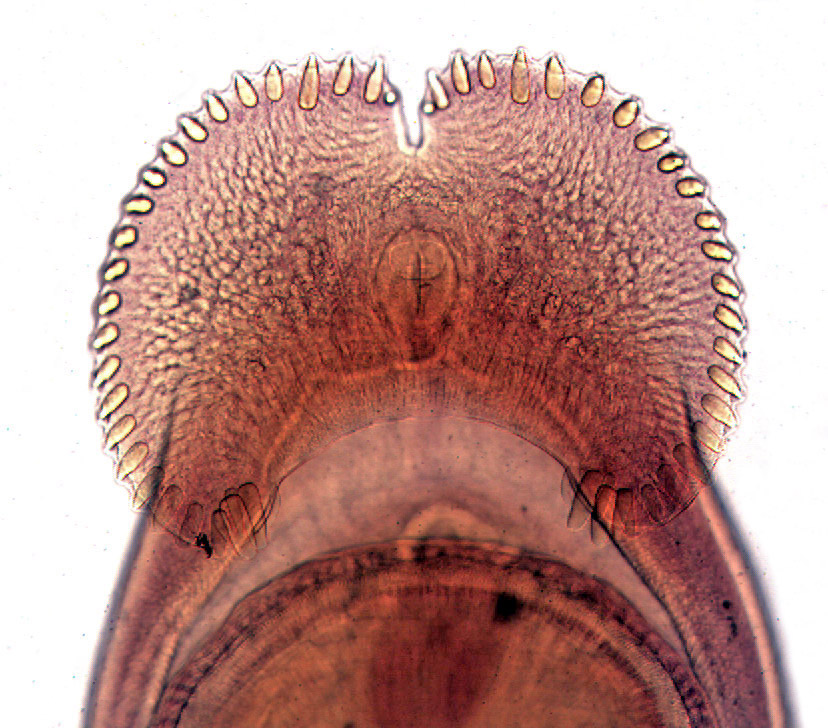 Vasyl: One episode in particular remains in my memory. On our way from collecting in a particularly productive oxbow, Stephen Greiman and Eric Pulis were working together to navigate our motorboat through murky water. Despite their best efforts, our boat hit a submerged stump. Inertia worked against Stephen, who was flung from the nose of the boat and hit the water with a splash. Stephen disappeared below the murky water, and just as I was starting to get worried, he re-emerged and safely got back into the boat. I didn’t catch this YouTube-worthy event on video, but I did get a photo of Stephen just after his unintended refresher in the oxbow.

Stephen: Going overboard was certainly an experience, one that I won’t ever forget. Eric was moving pretty quick through the tight channels of the bayou, and I was trying my best to spot submerged logs. However, given the water was not very transparent, and I obviously missed seeing a log, we hit that log and the boat just stopped. I flipped right over the front. Fortunately, I was holding tight to the rope attached to the front of the boat and Eric stopped the propeller as quickly as possible. I am certain both Eric and Vasyl were more worried than I was. For one, it was extremely hot out, so the quick splash was refreshing. And two, holding the rope close enough to the boat prevented me from really getting messed up by the propeller (although my heart rate probably increased some!). In the end we all had a good laugh, given I was okay, and it gave us a great story to tell.

Vasyl: Although Stephen insisted he was OK, to this day I suspect his head hit a submerged stump, because on our flight back to Grand Forks he asked me to scrap that letter of recommendation to the veterinary school and write a letter to graduate school. The young man decided to trade the career as a veterinary doctor for becoming a researcher and a university faculty. While I usually ask students to think at least twice about making such serious choices, I did not do it that time. I was very glad to hear Stephen's decision.

Stephen: Looking back, this trip was the final tipping point for my choice of pursuing a PhD with Vasyl over applying for vet school. The combination of this trip and experiences in Vasyl’s lab allowed me to grasp the opportunities available to a parasitologist. I discovered that they can work with a wide range of hosts, from invertebrates, to all major classes of vertebrates. They can delve into the biodiversity and discover new species, they can unravel the complex evolutionary relationships amongst parasites and amongst hosts and parasites, they can examine the impacts on host health and environmental health, etc. Really, after experiences like these, who would not want to be a parasitologist?

Vasyl: Stephen was accepted in our program as the top ranked candidate (outcompeting applicants who already had M.S. degrees). He went on to produce a terrific dissertation which he defended less than 4 years after receiving his bachelor's diploma, and just after turning 26! On the way he published 11 papers while still in graduate school, worked in expeditions in different parts of the world (from Alaska and Oregon to Guatemala, Philippines, Vietnam and Laos), received the UND Biology Outstanding Graduate Student award three years in a row, received the NSF postdoctoral fellowship, and won the ASP Ashton Cuckler New Investigator award in the first year after graduation. Stephen is now an assistant professor at the Georgia Southern University, and does a lot of great research. The trip was definitely worth it, and keeps reminding me that when we provide opportunities to students, the results may exceed all expectations.

Stephen: I have been extremely fortunate to have wonderful mentors that have afforded me unrivaled experiences. I have now been able to travel the world, work closely with leading experts, collaborate on large biodiversity expeditions, sequence genomes, and help build biodiversity collections through natural history museums like the Museum of Southwestern Biology. Now that I am a faculty member at Georgia Southern, I get the opportunity to excite undergraduate and graduate students about the world of parasites, just as Vasyl did for me.

Zombie Ant Research from Field to Fridge: Learning to Expect the Unexpected in Graduate School

Field Note: My War with the Raccoons

The many roads to SWAP